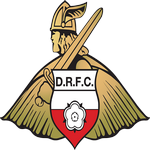 Rovers Ladies began the defence of their title with a stunning 9-0 victory away to Doncaster Belles.

Saffron Jordan hit a hat-trick, as Gemma Donnelly's side kicked off the new National League season in style.

Rovers registered a couple of early chances, before opening the scoring on nine minutes when Jess Holbrook slid a great pass through to Jordan, who finished well with her left foot.

The visitors doubled their lead on 15 minutes when Natasha Flint's strike went in off the bar and Lagan Makin added a third on the half-hour mark, firing home the follow-up after an initial shot was blocked.

Kayleigh McDonald added a fourth from a corner soon after, before captain Lynda Shepherd headed home Rovers' fifth before the break.

It wasn't until the 69th minute before Rovers' scored their sixth, as Shepherd played the ball through to Jordan, who slotted home her second of the game.

Two minutes later, Makin grabbed her second of the game after some great build-up play by Beth Donoghue.

Jordan completed her hat-trick on 74 minutes, converting Holbrook's cross, before McDonald netted her second of the game five minutes from time to round off the rout.

Coach Amanda Goodwin, who oversaw the victory, said: "Our performance was really good.

"We started the game really brightly and really sharp, and put Doncaster under a lot of pressure. We kept the ball well and we were ruthless in front in goal, which is something we'd spoken about in training.

"In the second half, it took us a while to get going, but as soon as we started to get into our rhythm, the goals started to come.

"There's always things to work on and we'll always find critical elements in how we play, because we want to be the best team we can be, but overall we're really happy with how we played."