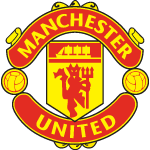 Rovers battled back from two goals down to earn a hard fought point at home to Manchester United Under-18s at Brockhall.

Strikes from Ethan Laird and Ademipo Odubeko gave the visitors a comfortable lead at the break, before Rovers fought back.

Chanka Zimba continued his fine form by pulling a goal back for Billy Barr's side just after the hour before Sam Durrant levelled things up with 10 minutes to go.

Making his first appearance since November after injury, right back Laird saw his initial cross blocked before he advanced towards the byline and fired a low shot past Rovers goalkeeper Jordan Eastham after just 11 minutes.

Soon after and the score was doubled, as hesitant defending allowed Odubeko to nip in and produce a composed finish past Eastham and put United in command.

Whatever Billy Barr said to his side at the break appeared to work when Zimba slammed home from close range on 63 minutes after latching onto a neat cutback, to hand Rovers hope of a comeback.

The hosts continued to press for an equaliser, with Jacob Carney continuing to make a number of fine stops to keep United ahead.

But there was nothing the teenager could do with Durrant's equaliser after a pass from Jalil Saadi, with 10 minutes left.

United could have won it late on, with Teden Mengi went close with a header and then Ethan Galbraith seeing a rifled effort from outside of the box saved well by Eastham.

That ensured the spoils were shared, and Barr will see positive in his side's character the come back from the brink.

Rovers are next in action at Liverpool on Saturday 2nd March, kick-off 11am at the Liverpool Academy Centre.