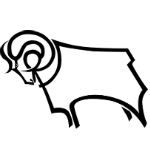 Flavien Enzo Boyomo and Kyle Connell saw Rovers race into a two-goal lead just 11 minutes into the clash, but it wasn’t enough to beat Derby County in Premier League North.

Both were headers, with Boyomo scoring after only four minutes at the Derby County Academy.

The hosts needed to respond and after a couple of strong saves from Matthew Campbell, they pulled a goal back before half time through a Jaden Mitchell-Lawson penalty.
After the break, the Rams were awarded another spot kick, and this time Morgan Whittaker took it, but saw the ball bounce back off the post.
Rovers were having to withstand some pressure but with 22 minutes remaining, the hosts grabbed the equaliser through Yoann Greco, who worked some space before finding the back of the net.
And soon after, the comeback was completed and it came through Morgan Whittaker.
It was well taken, too, as the youngster raced past his man before bending a great strike into the corner of the net.
It was a bitter pill to swallow for the young Rovers, who were without key players such as Jack Vale and Jack Evans, who were both in the Under-23s side just a day before.
Rovers are next in action at West Bromwich Albion in the league on Friday 17th February, kick-off 11.30am.
Rovers: Campbell, Pike, Thompson (c), Wilson, Carter (Connolly, 66), Barnes, Whitehall, Boyomo, Connell, Dolan (Brennan, 76), Burns.
Subs not used: Winterbottom, Zimba, Garrett.